Doctor Who: The Witch's Familiar ( review with spoilers ) 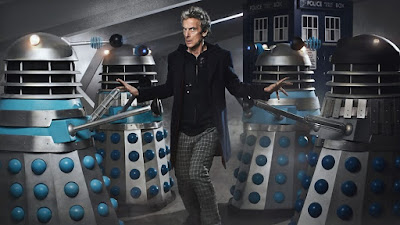 OK, it's only two weeks into Series 9 of Doctor Who and my reviews are already running late. I could blame it on causal loops and collapsing timelines and all that jazz but it's actually just down to me not having enough time. Which is probably the same thing. I could really use a Tardis right now... and so could the Doctor. He's trapped on Skaro, surrounded by millions of Daleks, with no Tardis and no sonic, while Clara and Missy have apparently been exterminated before his eyes. Dark times indeed for our favourite Time Lord but is the sun about to rise? 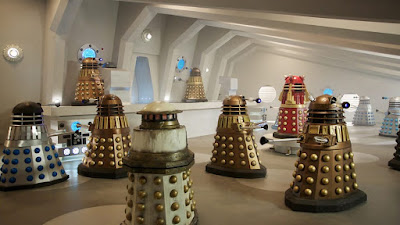 The long-overdue return to the two-parter format gives this episode room to breathe, as opposed to so many Matt Smith-era episodes that felt tight and constricted and were over almost before they got going. This slower pace may not be to everyone's taste but I'm glad of the chance to see more character insight and dialogue-driven scenes. Jenna Coleman and Michelle Gomez sparkle in their moments together, their characters an odd couple who hate each other but are forced to work together to save the Doctor. Of course, Missy betrays Clara, seals her inside a Dalek casing and tries to persuade the Doctor to kill her / it, but the pairing of the Time Lady and the Impossible Girl is good, bitchy fun while it lasts. 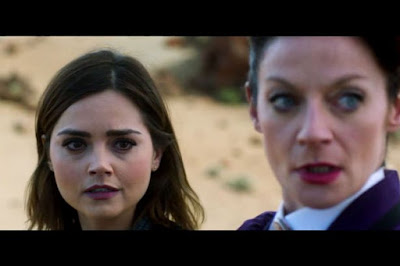 More serious, and packing a surprisingly emotional punch, are the scenes between Peter Capaldi and Julian Bleach as the dying, but still devious, Davros. Touching on such subjects as genocide, the price of compassion and the reason for the Doctor's original escape from Gallifrey, these scenes are a fantastic showcase for two actors at the top of their game. Bleach even manages to convince you, just for a moment, that Davros can be redeemed as the dying scientist seems to reach out to the Doctor and to Skaro's rising sun.... but, of course, it's yet another trick, yet another trap, and the ages-old battle continues. After the Dalek city finally falls and the Tardis Team escape, Steven Moffatt's cleverly-constructed script turns back on itself and the Doctor once again returns to Skaro, to show mercy by saving the young Davros from a horrible fate, even if this act does guarantee the eventual creation of the Daleks. All in all, this is a great story which builds on the Fourth Doctor's "Have I that right...?" speech to give us a tough and challenging look at the characters of the Doctor and his arch enemies... and a brilliant dodgems joke...
So, I'm giving this one Four Out Of Five Sonic Screwdrivers ( or Daleks' "unmentionables" )

Email ThisBlogThis!Share to TwitterShare to FacebookShare to Pinterest
Labels: Doctor Who, Series 9, TV

It was certainly better than the previous episode, but as Davros (and the Daleks) exist, it was clear from the start that the Doctor had already rescued him as a child, so there was no real surprise there. Sometimes I think Steven Moffat doesn't quite think things through.

Yes, obviously young Davros survived, but the point is that the Doctor's leaving him behind ( to be rescued or to rescue himself ) changed him for the worse and may have started him on the path to becoming the creator of the Daleks. The Doctor's shame at this act led him back in time to change things and show mercy and maybe, just maybe, to influence Davros in the right way...

Inevitable Moffat-bashing? Deserved Moffat-bashing, I'd say. It's never suggested that Davros had any other chance of surviving other than the Doctor rescuing him. Also, the Dalek (Clara) saying 'Mercy' (which is NOT what Clara said) demonstrates that the Daleks even having a concept of mercy comes from the Doc rescuing Davros. The end merely confirms what we already know must've happened - unless the Doctor was changing history. But that's the trouble with Moffat - he batters to death any sensible interpretation of the 'laws' of time. If the past has already happened, and if the future is someone else's past, then everything has already happened and the future is only the future from the perspective of the past - and vice versa. Moffat makes everything very confusing when one thinks about the repercussions of his scenarios. I don't think his plots are thought through enough.

If it was the intention of Moffat to suggest that Davros had survived despite being abandoned by the Doctor, and the Doctor then changing his mind and going back in time to show mercy in order to have a positive influence on young Davros, then it was too vague and ambiguous. And what was all that about World War Bi-planes and bows and arrows? To portray a primitive technology? It's unlikely that Skaro would have had anything resembling Bi-planes in its history, so once again it's Moffat throwing in what he thinks is a striking image to do nothing more than confuse and intrigue the viewer.

I find it all very superficial. There are good moments, but they fail to constitute a satisfying whole. And going by the 'next time' clip, it's back to being chased through confined corridors again. Oh dear, how many times is that now?

As for the mix of ancient and new technology, I think they're referencing another "classic Who" story featuring a centuries-long war which devolves into barbarism - either The War Games or Genesis Of The Daleks. Probably Genesis...

A bit of Dalek trivia for you.
One of the main Dalek opporators in those early days was our Jack ( Pitt ).
Whilst the main Daleks voices were provided by none other than Zippy fr Rainbow!

Zippy was way more bad-ass than those wimpy Daleks...