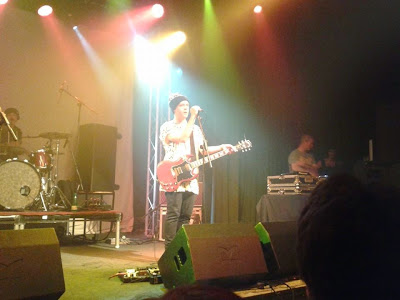 The '90s revival continues:
Only three days after the fantastic Super Furry Animals gig I was back in the good ol' Gloucester Guildhall to see former EMF frontman James Atkin on his first solo tour. I also dragged along my good friend Tom of Tom Wiggins Blogs! fame. ( It's Tom's blog. He blogs there. It does exactly what it says on the tin. Check it out. ) 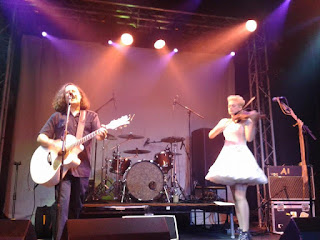 Support for this gig came from Miles Hunt and Erica Nockalls, playing an acoustic set of Wonder Stuff songs. The Wonder Stuff are yet another of those bands that I always liked but never got round to seeing, so this is as close as I've come. This was a low-key, warm performance with Miles chatting away happily between songs, regaling us with rock 'n' roll tales and telling us how The Size Of A Cow always crops up on Come Dine With Me when steak is served... which makes him a few quid. They didn't play that bovine epic but did perform some quite wonderful songs like Welcome To The Cheap Seats ( dedicated to the sadly-missed Kirsty MacColl ) and Don't Let Me Down Gently. Miles was in fine voice, although he had some tuning problems with his Gretsch acoustic, and Erica's fiddle-playing was lively and soulful, elevating the songs from any potential hey-nonny-nonny-ness. And she looked very striking too, as if she'd just stepped out of a music box. I'll defintely have to see this duo again. 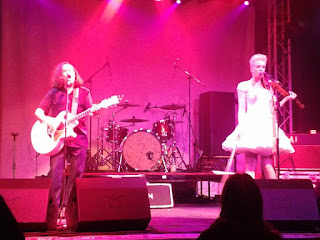 The last time I saw Mr. Atkin was at EMF's legendary two-albums-in-one-night gig at the same venue back in 2012, immortalised on the Long Live The New Flesh DVD. That was one of the best gigs I've ever seen and, although I didn't expect this one to reach similar levels of awesomeness, I was looking forward to James' new material. 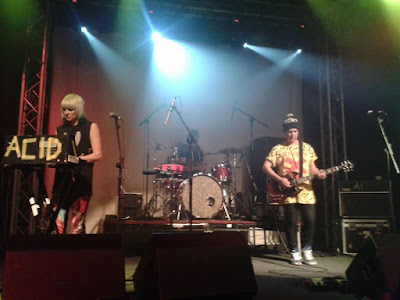 James and his two-piece band took the stage to a hearty hometown welcome and kicked off with the insistent throb of My People, its catchy indie pop and relationship-breakdown lyric setting the tone for the set. While James' new sound is necessarily more stripped down than his former band's, it shares a certain DNA, with most of the songs having a propulsive groove over which he adds some stinging guitar. Although it's early days for The James Atkin Band ( I don't know what else to call them ) they have a definite ability to lock onto a sound and pound it out. The keyboard player was having plenty of fun on stage  -  many of her synth parts were pre-recorded, allowing her to dance around the keys, sing backing vocals and beat hell out of a tambourine. It was nice to see an old-skool "Acid" sign on stage too ( see above ).
James Atkin isn't the most garrulous of frontmen but he seemed happy to be back in his old stomping grounds and had a couple of chats with the Forest Of Dean elements in the crowd. ( He was even seen hanging out in the bar prior to the gig. ) His breathy vocals and wide-eyed style are as engaging as ever and, with his omnipresent woolly hat covering his newly-greying hair, hardly seems any older than the lad in the Unbelievable video  -  filmed in this self-same venue. After hitting us with some future favourites like the mellow Love Blind and the anthemic The Silence Is Deafening, James ended the set with a couple of old favourites  -  EMF's Unbelievable and I Believe  -  what else? The hardcore ravers partied like it was 1991 again and everyone went home with smiles on their faces.
Posted by cerebus660 at 00:20