Farewell to the sidemen...

There have been some sad announcements over the last couple of days from the world of Rock 'n' Roll. Former Spiders From Mars bass-player Trevor Bolder died yesterday at the early age of 62. Bolder played on David Bowie's breakthrough albums of his "Glam" period from 1971-1973 and was an integral part of the Spiders, managing to be both hard-rockin' and nonchalant at the same time... with some awesome sideburns. Like the rest of the band he wasn't treated amazingly well by Bowie, who dissolved the Spiders with no warning at his "farewell" Hammersmith Odeon gig in 1973, but Bolder did go on to have a later ( if lesser ) career with Uriah Heep.
I've been a Bowie fan for most of my life ( except for a short period when my then-neighbours would play The Laughing Gnome at ear-shredding volume at 3 in the morning... which kinda put me off him for a while ) and  -  regardless of all his other great music  -  it's always the Ziggy / Aladdin Sane period that holds the most magic for me. Bolder was ( along with Woody Woodmansey and the late Mick Ronson ) a big part of that. Thanks, Trevor...

Unfortunately, the news of Bolder's death came hot on the heels of similarly sad news from Germany...

Ray Manzarek, keyboard player and founder member of The Doors had passed away at the age of 74. Manzarek was a highly talented and respected musician whose long keyboard fantasias and distinctive Vox Continental organ sound defined the Doors' music as much as Jim Morrison's lyrics and vocals. ( John Densmore and Robby Krieger were no slouches either... ) 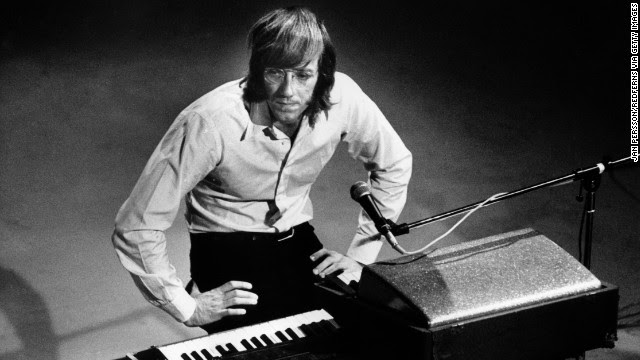 The Doors are, in contrast to my comments about Bowie, a band I came to appreciate relatively late in life  -  just like Led Zeppelin or the Beach Boys. When I was younger I quite liked some of their more famous songs ( Light My Fire, Break On Through ) but I wasn't keen on the long keyboard solos and I thought Morrison was too pretentious. Now I realise those two things are part of what make The Doors such a classic band! I just needed to properly listen to the band... and loosen up a bit :-)
After only owning a Doors' Greatest Hits I recently went out and bought the classic album LA Woman, which has been a revelation  -  so much great music! So I found it quite sad to hear of Mr. Manzarek's passing... just as I was beginning to really appreciate his band's music.