...and when Bagpuss wakes up, all his friends wake up too. 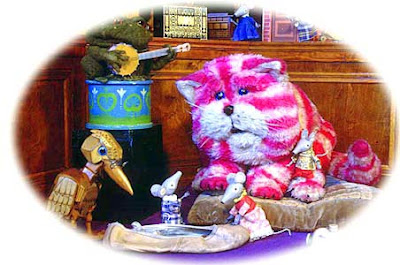 A sad day: the legendary Oliver Postgate has died, aged 83. Along with puppeteer and artist Peter Firmin, Postgate created such children's telly classics as Noggin The Nog, Ivor The Engine, The Clangers and, of course, Bagpuss. Their best creations still stand up today despite, or because of, their simplicity and lack of sophistication, compared to today's more flashy programmes. They had a charm and gentle humour which endeared them to millions, and a distinctly British point of view, not to mention Postgate's wonderful narration.

Each generation will say that their cherished TV programmes were the best and subsequent efforts were not as good. But I do think that British kids' telly enjoyed a Golden Age from the late '60s to mid 70's, when creators had a certain degree of talent and control over their work which is lacking in today's demographic-chasing climate. As well as the output of Postgate and Firmin's Smallfilms, there were also such quirky classics as Mister Benn, Fingerbobs, the Anglo-French Magic Roundabout and the Trumpton/Chigley/Camberwick Green metropolis. We also had a surprising amount of "telefantasy" serials such as Children Of The Stones, The Changes, Sky, King Of The Castle etc. Oh, and a certain Doctor. Whatever happened to him?

To get back to Oliver Postgate and co. I've recently discovered, through the magic of YouTube, an old b&w series called Pingwings, which had all the charm and warmth of their later, more successful series. I'm not viewing this through any nostalgic haze because it was before my time, but the homespun quality still shines through. Even my kids, reared on a diet of Teletubbies and Tracy bloody Beaker, love Bagpuss and friends as if they were their own. So, Mr. Postgate's Films may have been Small but his legacy is huge.
Posted by cerebus660 at 23:00

Email ThisBlogThis!Share to TwitterShare to FacebookShare to Pinterest
Labels: TV

Indeed. There's a great book called something like 'The Golden Age of Children's Television' which is well-worth tracking down if you don't already have it. It covers the very period you mention.

Sounds good, Kid! I'll have to see if I can find it.