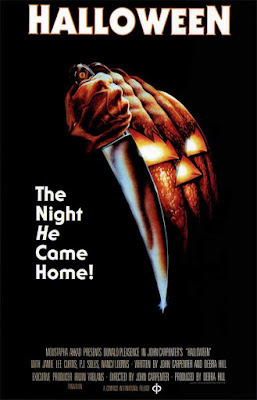 Last night Sarah, James and I went to the good ol' Gloucester Guildhall to see a timely re-release of John Carpenter's classic Halloween. Although maybe not the first so-called "slasher" movie ( 1974's Black Christmas has a prior claim to this dubious status ) Halloween is probably the best and most totemic of that sub-genre. All the familiar elements are already in place: the horny teens ( you have sex, you die! ), the holiday theme, the small-town setting, the implacable killer. What's impressive on watching this film today is how assured it all is. This was only Carpenter's third full-length movie
( after the low-budget science fiction comedy Dark Star and tough urban thriller Assault On Precinct 13 ) but he handles everything with such style and economy that you'd think he'd been doing this kind of thing for years. 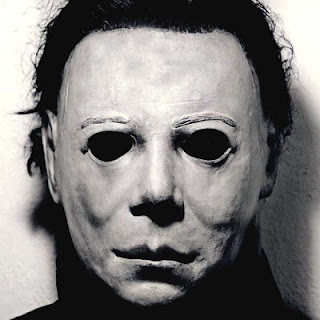 From the opening flashback of young Michael Myers killing his sister on Halloween in 1963, to twitchy psychiatrist Donald Pleasance discovering the "evil is gone" from his place in a secure hospital, and on to Michael's reign of terror in Haddonfield, Halloween is an efficient chiller which cleverly ramps up the tension over its lean 101 minutes. Carpenter isn't afraid to use long, slow takes and prowling tracking shots as his mostly teenage cast go about their Halloween / baby-sitting rituals, while all the time the killer is watching them and waiting for his moment with "inhuman patience". Some of the creepiest scenes in the film don't involve obvious jump-scares ( although there are some great ones! ) or overt gore but just the simple sight of the white-masked "Shape" lurking just on the edge of the characters' vision before disappearing into the autumnal landscape. 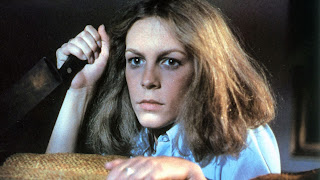 The majority of the teenage cast are just about adequate but Jamie Lee Curtis gives a beautifully nuanced performance as the shy, unfashionable girl who just wants to be accepted and maybe have a boy ask her out on a date, but who has to find reserves of courage and strength to protect her young charges ( and herself! ) from the seemingly-unkillable Boogeyman that is Michael Myers. It's the performance that introduced her to the world and it's no surprise that she kick-started her career with this movie. And then there's that iconic synth soundtrack  -  probably the most recognisable horror movie theme after The Excorcist or Psycho  -  as cold and relentless as the killer himself.
After nearly four decades (!) Halloween still stands as one of the most iconic and imitated horror movies and is still well worth its place in the pantheon.
And speaking of white-masked freaks... 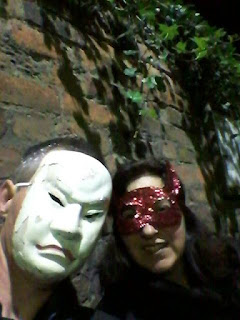 We went for a walk around Gloucester after the movie and had a quick drink in the lovely Cafe Rene  -  here are Sarah and I sitting outside the pub... 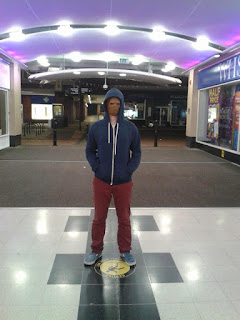 And that very mask is actually Captain Kirk / William Shatner!
How scary is his face?
:-)

Whenever I watch Halloween I always try to imagine Michael Myers saying "Beam me up, Scotty..."
Actually, I just made that up :-)