Portland, Oregon's finest psych-pop hipsters The Dandy Warhols played Bristol recently, for the first time in years, so I headed down to the home of Banksy and trip hop with fellow culture lovers Glenn and Caz. The venue was the Anson Rooms, a part of Bristol University. I hadn't been there since the late '90s when I'd seen Terrorvision play one of the maddest, hottest gigs ever, so it was interesting to revisit the place. Quite a smart venue, probably only about 400 or 500 capacity, with a well-staffed and accessible bar. We got there just in time to catch the start of the Dark Horses' set. They play a moody, Gothy art-punk, with one song being a dead ringer for the Velvets' Venus In Furs. Derivative, then, but full of potential.

The Dandy's then came on to polite applause from a fairly reserved crowd  -  set list above. This was the fifth time I'd seen the band and, while not the best performance I'd seen from them, they played a fine set with their usual impeccable musicianship and laidback, charismatic cool. The audience was a mixture of hardcore Dandy's fans and younger student types who mostly came alive when the hits were played. Glenn ( world's no.1 Dandy's fan ) and I of course went down the front to get the full effect of the band's dream-pop soundscapes... and to get a good look at the lovely Zia... ( Shallow? Moi? ) 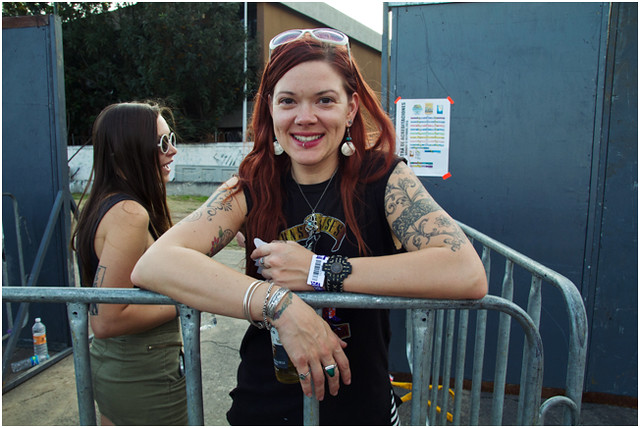 As ever a couple of songs outstayed their welcome but crowd singalong favourites like Boys Better, Horse Pills, Bohemian Like You and Get Off had us all jumping up and down, and the peerless Godless was the expected highlight with mass audience vocals replacing the absent horn section of the recorded version. Although slightly marred by a few sound problems and a lack of encore it was a fun gig with some great company. "Super cool / Dandy's Rule OK..."

A few months back ( when my melted PC meant very little blogging was going on ) Sarah and I went to the good ol' Gloucester Guildhall to see The Selecter. I'd seen them before, of course, but Sarah hadn't and didn't really remember them from back in the day. But it only took a couple of songs for her to get into the groove  -  I defy anyone with a pulse not to move their feet to The Selecter's red hot ska beat! They played a great, sweaty set with all the old faves present and correct: Missing Words, On My Radio, Three Minute Hero all as fresh and invigorating as jumping naked into a mountain stream... I imagine. Fine support came from legendary Bristol reggae band Talisman, bringing some warm Caribbean sounds to a chilly Gloucester.

On the local bands front I've been to a few gigs by old favourites Demob and Noise Agents and also a new set of old mates from various bands under the guise of Borrowed Time. Here they are looking dead hard on the mean streets of, er, Cheltenham. Borrowed Time play a superior form of Street Punk ( circa 1982 ) with some rough 'n' ready but tuneful songs which would have easily stood up against the likes of Chron Gen, Infa Riot or Anti Pasti back in the day. For a new ( if not young ) band they are doing very well and will be playing at the Rebellion Festival in Blackpool next week... along with The Selecter. ( I don't just throw this blog together you know. OK, I do... )

And finally Esther, I saw Stroud disco-Punks ( heh heh! ) Chinese Burn for the umpteenth time the other week at Gloucester's grimy Lower George pub. A cracking gig from the Burners with loads of good friends in attendance. I even dragged Sarah along. This gig was on the day after the last of the original Ramones, Tommy Erdelyi, had passed away so it ended with an ( ahem! ) all-star cover version of Blitzkrieg Bop. Various members of Chinese Burn, Borrowed Time, Noise Agents and even yours truly all made complete fools of ourselves as a tribute to Tommy Ramone. There's me in the grey Ramones T-shirt, sharing a mic with my mate Cliff. As we used to cover Blitzkrieg Bop back in the Death Planet Commandos days, I tried to persuade ex-DPC guitarist the mighty Mark to join us too but he remained behind to fill half of the frame at the bottom of the photo :-)
Hey ho! Let's go!
Posted by cerebus660 at 02:19