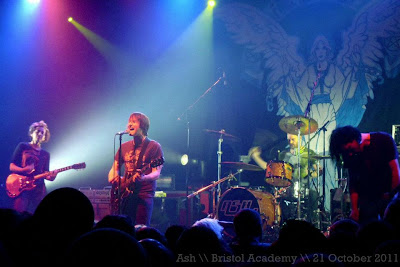 It's been 2 years since Ash last came this way, on their A-Z Tour, and rocked the good ol' Gloucester Guildhall. This Friday they returned to Bristol for the first time in a long while to play the Free All Angels album in its entirety, plus a greatest hits set. The doors opened at the ridiculously early time of 6:30 so we had missed the two supports by the time we got to Bristol. ( "We" being me and my good mate and fellow Rock 'n' Roll addict, Glenn, of Chinese Burn fame. )

Ash came on stage to a rapturous reception which didn't let up for the entire gig. As it was the opening night of their mainland UK tour, the band must have been happy with the reaction: the crowd were enthusiastic... OK, bloody mental actually... and very, very loud. Free All Angels proved to be a wise choice to play all the way through, being packed as it is with such classic teen-Punk singles as Walking Barefoot, Shining Light and Burn Baby Burn - the latter being the clarion-call which dragged me down the front to be pushed and pummelled in the crush of rabid Ash-fans. The band's enthusiasm and sheer joy was infectious as they blasted through their mixture of razor-sharp riffs, unforgettable melodies and emotion-laden lyrics, invigorating lesser-known album tracks like the Ramones-y Pacific Palisades and World Domination, and the more fragile ballads like Candy and Someday.

Highlights are hard to choose from such a fantastic set, but I'll just mention the anthemic Shining Light, the beautiful Star-Crossed, the heartbreaking lyrics of Oh Yeah, and an absolutely manic encore of Kung Fu. ( The only song which I really hoped they'd play, but didn't make the set, was the peerless Envy. Maybe next time. ) One other song which stands out is A Life Less Ordinary, with the following lyric:

...which a large percentage of the males there ( including me ) were seemingly singing to one person on the stage. Yes, that's right, the lovely Charlotte Hatherley is back with the band, for this tour at least. It's great to see Ash as a four-piece, with Charlotte's effortless guitar solos and keyboards adding immeasurably to the boys' sound, something that seemed missing the last time I saw them. Managing to be both ice-cool and smokin' hot at the same time, whether jamming back-to-back with a grinning Tim Wheeler or just playing away, eyes closed, lost in the music, Charlotte is a joy to watch and listen to. Gratuitous photo follows: 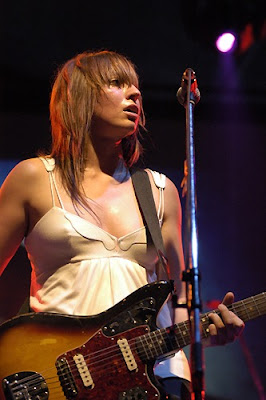 So, a great gig, probably one of the best I've been to in a long time. Hopefully Ash will pass this way again soon. And hopefully Charlotte will still be with them.

On the way out I had to blow 20 quid on a Free All Angels T-shirt and then Glenn and I headed to a pub on Park Street for a quick drink before heading home. Some bland, Maroon 5-type student band were playing, further reminding us ( if only by comparison ) of what a classic Rock band we'd just witnessed in full, ear-shredding, life-enhancing effect. You really can't beat experiences like that...

Soundtrack: Free All Angels, naturalement
Posted by cerebus660 at 20:16