Primal Scream at The Eden Project 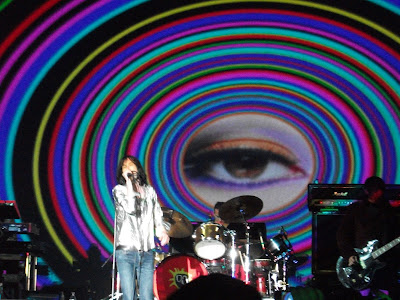 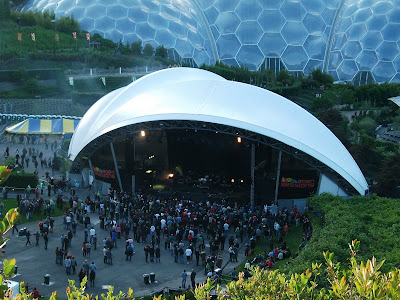 The Eden Project, as well as being a fantastic place to visit, with its enormous domes ( or biomes as they're known ) filled with exotic flora, is also the perfect setting for an outdoor gig. The surreal, Logan's Run-reminiscent biomes, nestling in a former china clay quarry, overlook an amphitheatre which has a capacity of around 1000. 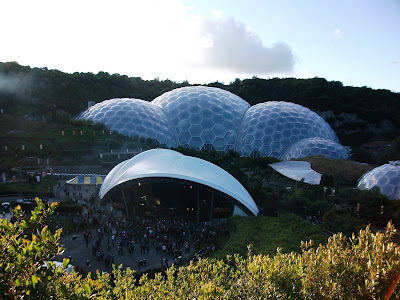 So, it's an ideal location for a mini-festival: the crowds aren't too massive, the bar's never too far away and..... no mud! Always a bonus.
First up were The Horrors, previewing their new album, Skying.
( Actually there were a few acoustic performances earlier in the day but my mate Glenn and I were at the beach... ) 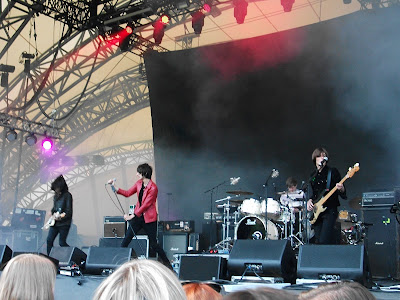 I wasn't sure what to expect from The Horrors, really. I remember they made quite a splash a few years back with their Goth/garage racket and silly names ( Faris Rotter? ) but I don't think I could name so much as one of their songs. By all accounts they had since moved on from their punkier leanings, so I was interested to see what they were all about. Their set at Eden turned out to be a mightily impressive amalgam of Goth, psychedelia and ( I apologise for the phrase ) shoegazing, very intense and veering off into the experimental at times. Faris Badwan is a man of few words but is a charismatic frontman with a fine, Ian McCulloch/Jim Reid-style voice. Songs like Sea Within A Sea, Moving Further Way and the fantastic Still Life bring to mind bands as diverse as Killing Joke, MBV, The Damned and the Psychedelic Furs, with a large debt owed to Joy Division at their toughest. I'll definitely have to track down their albums..... 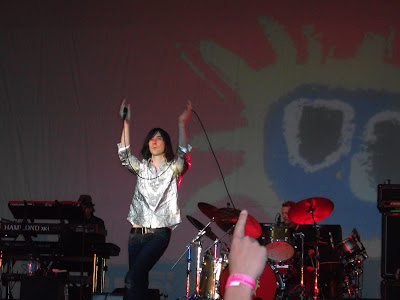 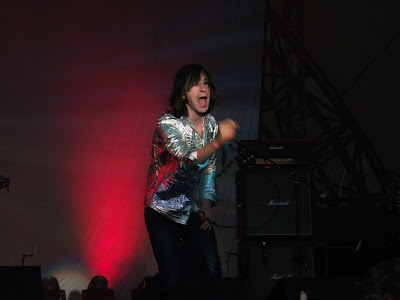 Bobby and the boys were playing the classic Screamadelica album in its entirety, to celebrate its 20th (!) anniversary. Hard to believe that album's been around for so long: it doesn't seem that long ago it was considered cutting edge and a way forward for guitar groups who tried to emulate its mash-up of rock, dance, gospel and dub. But, of course, this is the voice of advanced age speaking - the curious way time seems to speed up as you get older plays tricks on the memory. In the same way it only seems a couple of years since I last saw Primal Scream live, when it's actually been 11 years - bloody hell! 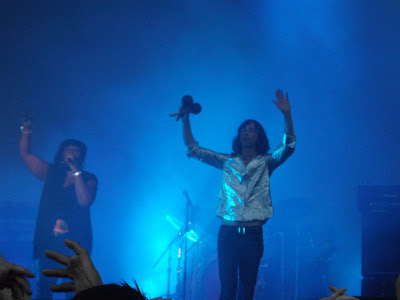 I'm glad to say that Primal Scream kicked arse! With Denise Johnson on hand to provide gospel harmonies, a silver-tinfoil-shirted Bobby Gillespie led his band and the crowd through the raving highs and chilled-out lows of Screamadelica. And check out the psychedelic backdrops..... 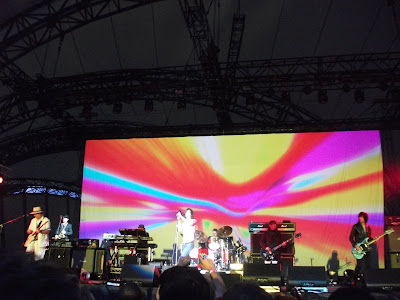 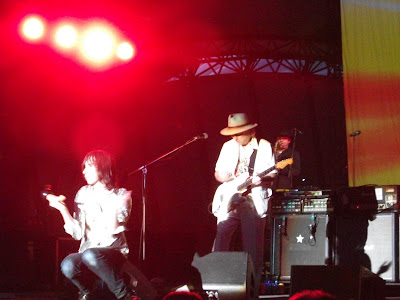 Primal Scream are a band who have had their ups and downs, both personally and musically; but, when they're on form, they are an amazingly tight, funky, powerful unit. From the singalong gospel groove of Come Together, through the blissed-out dub of Higher Than The Sun to the try-not-to-dance-to-this-one, shuffle-beat of Loaded, the Scream had the audience in the palms of their hands. We danced, clapped, shouted, cheered, pulled hair and scratched with fingernails - hang on, that last one was a girlfight that broke out nearby - and then did it all some more. Every face had a huge grin, every voice was shot away from singing. 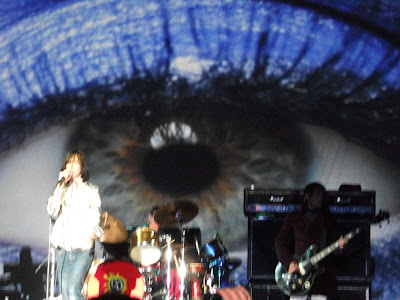 The lynchpin at the centre of it all is Bobby Gillespie, a man who logically should have ended up just another rock 'n' roll drugs casualty years ago, but is still kickin' it live and putting many of his contemporaries to shame. You can tell he loves and lives the rock 'n' roll dream. Part Jim Morrison, part Iggy Pop, all skinny Scottish livewire, Bobby is one of the great frontmen, his occasional vocal weaknesses more than compensated for by his huge enthusiasm, attitude and plain coolness. 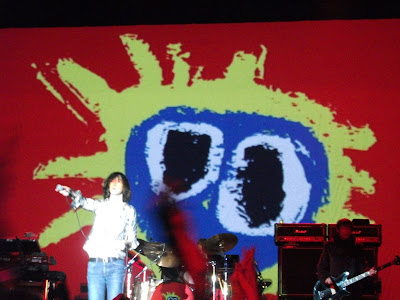 After the classic album had been reinvented and reinvigorated, the Scream ripped through their Stones-y blues-rock classics, Jailbird, Rocks and Country Girl as encores, proving yet again that when they're on fire nobody can touch them. After the show was over and the crowds made the long trek back out of the Eden Project to the car parks, groups of fans sang Come Together over and over, echoing through the Cornish landscape. We had indeed all come together to see what was, if just for one night only, the best rock 'n' roll band on the planet.
Soundtrack: Still Life by The Horrors
Loaded, Country Girl and Rocks by Primal Scream
Posted by cerebus660 at 20:20

I went to see them back in 97 when they played in Dublin. They were promoting the album Vanishing Point with their new bassist Gary Mounfield...

It was a decent gig- sound wasn't the best. Would love to see them play a Screamadelica set!

Haven't been to a Primal Scream concert, maybe someday :-)

@Colin: Ouch indeed! Mani looked to be struggling at the gig last week but emerged "refreshed" for encores...

@Joanne: They're really on form at the moment so, if you get the chance, I'd recommend you see 'em live...

mental image of Simon and Glenn in their budgie smugglers

It's not a pretty picture, is it? We were actually clambering around on rocks... fully clothed. A bit too chilly for anything else :-)

Good to hear from you, Mr. B! Hope you and Em are well.

Re; The female singer alongside Gillespie at The Eden project photo... That is most certainly NOT the wonderful Denise Johnson!!

Hi Mr/Ms Anonymous! If the lady isn't Denise Johnson, then I apologise to all concerned. If you have any further information I will gladly change the post.

BTW somebody else who was at the gig also made the same ( possible ) mistake:
http://www.flickr.com/photos/mollygreenephotography/5894699824/in/photostream/