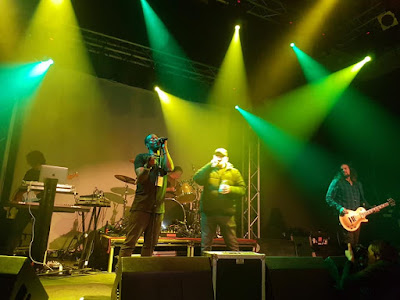 Back to my favourite music venue for the first time in far too long to experience the dance / rock loopiness of Black Grape. I'd never seen the boys from the Grape before but had hugely enjoyed seeing Shaun Ryder's "other" band, The Happy Mondays, a couple of years ago. My good friend Glenn ( Borrowed Time superstar ) kindly gave me a lift into G-Town ( as I believe the youngsters call it ) and we found ourselves in a strangely half-empty Guildhall. The underwhelming support set by a clearly phoning-it-in DJ didn't help. 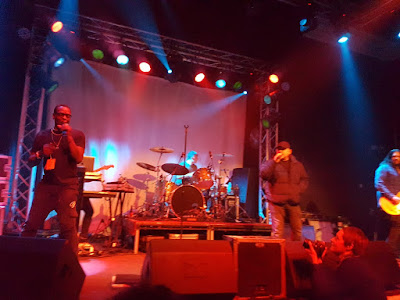 About ten minutes before the band were due to come on there was a last minute surge and the hall became about 3/4 full. Shaun, Kermit and the band ambled out onto the stage and the party started with In The Name Of The Father ( "and the Holy f###ing Spirit, amen" ) and a couple of new songs from their recent album, Pop Voodoo. Shaun wasn't quite sure where he was at the start: there was some debate as to whether Gloucester was in the North ( er, no... ) or the West. They decided we were honourary Northerners and played ( of course ) A Big Day In The North. Kermit then went on to chat about what he called the "noble art of shop-lifting" and to bemoan the fact that not enough people do that any more... 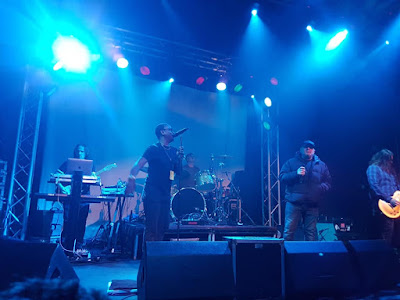 Kermit and Shaun are a great double-act, constantly taking the piss out of each other and generally acting like a couple of naughty, overgrown schoolboys. Many songs were preceded by autobiographical facts such as "We wrote this song while smoking crack in a cupboard in LA" and debates about whether Shaun should take off his puffer-jacket or not. ( I was melting from the heat in my T-shirt so God only knows how he felt! ) Luckily, the music was as as hot as the atmosphere  -  the new songs went down well and the crowd went mad ( well, mad for a Gloucester audience ) to such groovy classics as Reverend Black Grape, Tramazi Parti and the peerless Kelly's Heroes. Glenn and I had a pretty good spot down the front so had a great view of the action and had our ears blasted by the sound  -  I think the ringing has just stopped after about three days!
Finishing with a funktastic Shake Well Before Opening and a titanic encore of Little Bob ( "Boooom! Bang!" ), the two front-men left the stage, whilst the band played some outrageously over the top heavy rock, with the guitarist hanging over the crowd-barrier, much to the disgust of the glaring security men.
A fun gig then, although I'd like to see them with a slightly more engaged audience. Black Grape are touring well into next year so we may do it all again somewhere else...
Posted by cerebus660 at 00:02

Nice to see your posts back on the music scene - I know what you mean about audience engagement making / help make a gig, I saw the Mekons in London about 12/13 years ago whilst I was working there and most of the audience seemed more interested in sitting at the bar and talking for the first hour (they seemed to warm up to them after a while) there loss as it was a really good gig as well.

It's a strange thing, isn't it? I've seen people go nuts over what seem to me to be lackluster performances while other bands get the cold shoulder. I'm sorry to say my home town of Gloucester is often guilty of this "Come on, impress me!" kind of attitude. I once saw a band called Six By Seven play a pretty good, energetic set in front of about 20 apathetic students. When they came back out for an encore I said to the lead singer that the audience wasn't worth their time - he replied that they were being paid so what the hell? and played the encore anyway. It must be very frustrating...