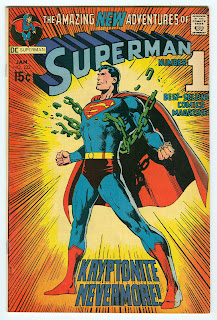 I was pleased to see I've had a letter published in this month's SFX magazine ( no. 231, March 2013, buy it now! )  -  my first appearance in the mag for quite a while, but under my "real" name this time. The "letter" is actually a combination of two comments I posted on the SFX website's forum, in response to the first official poster for Zack Snyder's forthcoming Superman reboot, Man Of Steel. I was alarmed by the way this image ( Supes in chains! ) was such a downbeat, gloomy introduction to the new Superman. It just seemed a crazy choice to promote the movie and, for me, a total misrepresentation of what the character is all about. I prefer to see our favourite Kryptonian bursting  out of chains as in Neal Adams' iconic image above. The recent movie trailer has gone some way to dispelling those concerns... but I'm going to reserve judgement until I actually see the film. SFX Reviews Editor, Ian Berriman, very kindly contacted me, saying he liked my comments and wanted to publish them in the magazine... 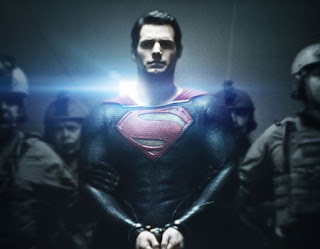 Here's the letter as published:

Re: The Man of Steel teaser poster
I wonder if, in the usual Hollywood eagerness to make things “darker” and “more realistic” that they haven’t thrown the baby out with the bathwater. Superman isn’t Batman, he isn’t a dark knight, a lone avenger etc. He has always been defined as the best humanity can aspire to… but with super powers :-)

( After this first comment a couple of other Forum-ites replied, both effectively saying that the character and film of Superman needed to be dragged, kicking and screaming into the "modern" world. I replied... )

We may not be in an age of optimism, heroism or nobility… but were we ever? I don’t think that has any bearing on the character. The Christopher Reeve Superman movies came out of a time of rampant inflation, unemployment, terrorism, Presidential abdications and so on. But the character rose above it… literally.

( One of the other commenters, "Bobcat", had said that it was unrealistic for Superman to be as I described him above  -  did I think Supes got all that nobility over night...? )

And, yes, Bobcat, I do think Superman got all that overnight: as John Byrne once said, Clark Kent / Superman was raised that way… ( This last paragraph wasn't published )
Hopefully I’m reading too much into what is just a teaser poster… I hope to be proved wrong…

I loved Mr. Berriman's reply:  "I think we can put this down to the success of Christopher Nolan's Bat-movies, can't we? Same goes for the tone of the Star Trek teaser trailer; suddenly everything's got to be dark. It wouldn't surprise me if the Smurfs 2 trailer features the Smurf village in flames and Papa Smurf clapped in irons..." 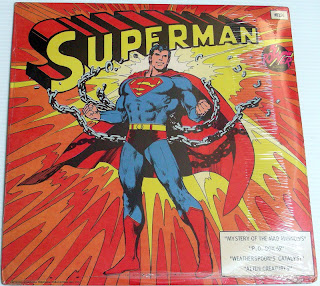 Here are a couple more versions of that "Kryptonite Nevermore!" cover  -  for me, one of the most defining images of the true Man Of Steel... 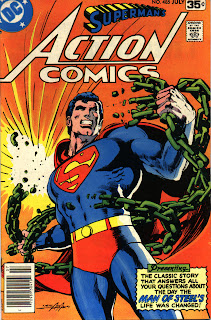 Me's got them top and bottom Superman comics. Me's happy.

I just wish they didn't redo the origin with every reboot. We all know how Supes ( and Spidey) got his powers.

Well said to both you and Mr. Berriman!

Congrats, Simon! I wrote a letter or two to Mountain Biking UK magazine when I was in my teens but never got anything published. I hope the new Superman retains some of the innocence of the original. While it is true that some humour has returned to the superhero franchise (though not to the tune of nipple-suit-Mr-Freeze humour), I think Iron Man's influence is turning the tide back towards straight-faced frivolity.

@Richard
Thanks! I didn't want to judge the movie before it comes out, but I wanted to say something about the tone they were setting with that poster...

@Matthew
Thank you! I definitely need more cool things at the moment...

@Tom
Although I certainly wouldn't want to turn the clock back to the ridiculous campness of Batman And Robin, I do think this constant striving to make things "dark" is unsuited to certain characters... especially Superman. Even the trailer for Iron Man III makes it look a lot less fun than the previous two movies. But, again, time will tell.

You were ripped off then - it only cost 5p when it first came out. (Mine has the T&P price stamp on the cover.)

A tenner's not a bad price for such a key issue if it's in decent condition. Three and a half pence IS even beter 'though.