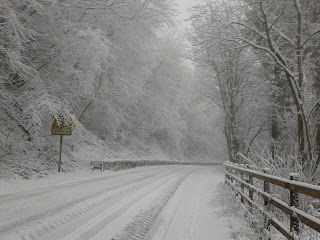 Winter finally arrived in my corner of England on Friday, after weeks of rainy, gloomy weather. A snowstorm swept up the Severn estuary and hit Gloucester at about 05:30 in the morning. I headed out to work at 06:45am ( allowing more time than usual ) trusting the main roads to have been sufficiently gritted by the local council. Of course, they weren't. This is England after all...
I managed the 13 or so miles ( unlucky for some! ) to Nailsworth on the icy, snow-covered roads but, on the A46 above the town, my car decided it would rather slide sideways than carry on up the hill. After much slipping, sliding and swearing I ended up abandoning my car to the snow and decided to walk to work...
The above photo was taken on my trek through the snow, along the Nailsworth / Avening / Tetbury road which borders Princess Anne's estate. Strangely enough I didn't see her along the road... or anyone else much, to be honest, just the occasional 4x4 or tractor... 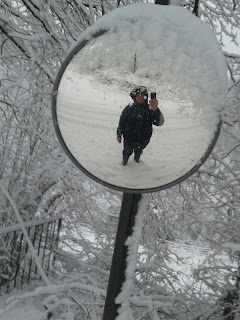 And here's a pic of me on the road, looking like a fat turtle, reflected in this convex mirror :-)
Apart from the blizzard blowing in my face the hike through the snow wasn't too bad  -  beautiful, almost Scandinavian scenery and the crunch of fresh snow underfoot. After stopping off in Avening for a medicinal Mars bar I trudged on up the hill to Tetbury. Up there on the top the blizzard was howling and it really wasn't too pleasant. At about 10:00am I met a bloke coming from the opposite direction who said he'd been walking from Devizes in Wiltshire since 05:00am that morning  -  I thought my journey was far enough! I was getting a bit bored of it all by this point so stuck my thumb out at the next passing Land Rover and, luckily enough, the guy stopped and gave me a lift for the last mile or so. Phew! As I'd expected, hardly anyone else had made it in to work and, after I'd only been there for about an hour, one of the managers gave the few staff a lift home in his 4x4. It was good to get home... even without my car :-) 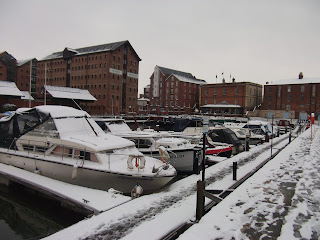 Yesterday Sarah and I caught the bus into Gloucester and I took a few photos of the snow-covered city, starting with this view of the docks. The white stuff was starting to melt by this point but still looked, er, cool... 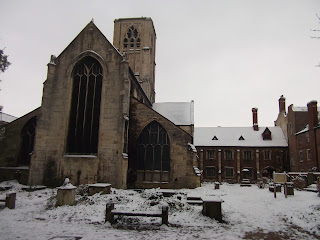 This is St. Mary De Crypt church, just along from Cafe Rene, one of Gloucester's premier rock 'n' roll venues, as seen in this post... 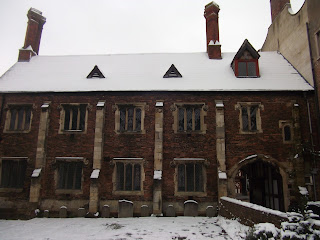 More views of nearby buildings and faces... 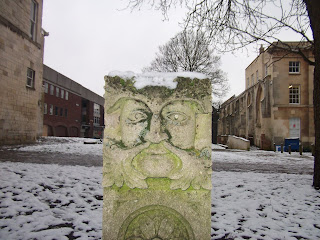 And below are a few glimpses of Gloucester's beautiful Cathedral... 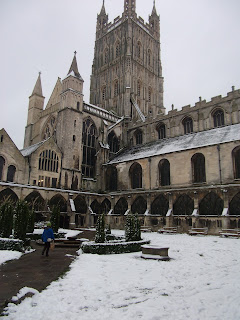 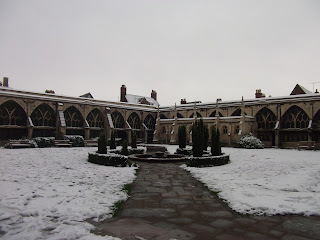 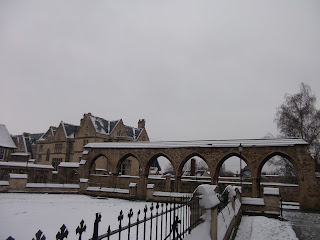 We also had a quick look around the shops, including the currently-ailing HMV, where I picked up a few albums which I wouldn't be able to find in bloody Tesco's if HMV do go under. ( For the record  - ho ho  -  I got The Beatles' "Red" Album, TV Smith's Last Words Of The Great Explorer, John Cale's Paris 1919, the Floyd's Meddle, Jane's Addiction's Ritual De Lo Habitual and Television's Marquee Moon. A few of these I already have on vinyl, but what the hell... ) 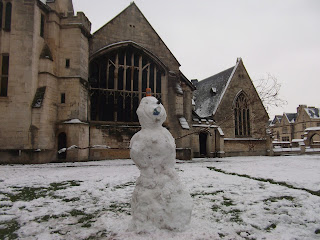 This morning my father-in-law and I managed to free my car from its icy tomb ( melodramatic, moi? ) and Sarah and I brought it home. But with fresh snowfall forecast for the next couple of days it remains to be seen if I'll be going anywhere...

Soundtrack: Last Words Of The Great Explorer by TV Smith's Explorers
Posted by cerebus660 at 21:11

I couldn't resist clicking the "cool" checkbox for this post, because I just can't say no to a pun.

What great photos! And feeling a little jealous, as it's been snowless here since sometime in November.

snow sucks, man. it's alright for about an hour, and then people walk and drive all over it and it turns to sludge and ice, and I fall over. every fucking time.

@Richard
Thanks for the comment and the "cool"
:-)
The snow is, indeed, lovely to look at but a pain when it comes to transport. We are amazingly ill-prepared for even a small amount of snow in this country. Our Scandinavian neighbours must think we're a bunch of idiots...

@Joe
Good to hear from you, mate. Hope you're doing OK...