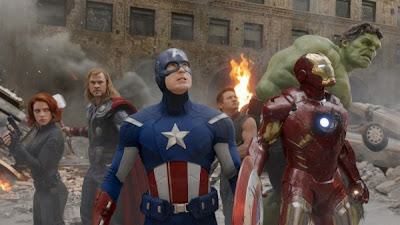 "And there came a day, a day unlike any other, when Earth's mightiest heroes found themselves united against a common threat. On that day, The Avengers were born - to fight the foes no single super hero could withstand..."

The Avengers have finally assembled in Joss Whedon's much-hyped blockbuster and, after all the scene-setting in previous movies, one question hangs over our harassed heroes' heads: is it worth the wait? 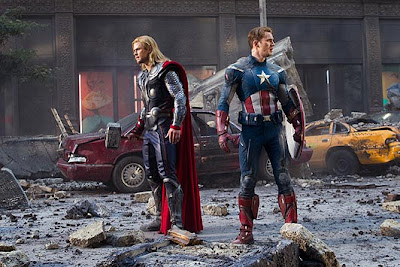 Well, for this blogger at least, it's a resounding "Yes!"


Avengers Assemble ( do I have to keep calling it that? ) is more or less everything I could have wanted from an Avengers movie - action-packed and funny ( well, it's Joss Whedon, gorram it! ) while still managing to squeeze in the requisite character development for its large cast of spandex-wearers. And visually it perfectly captures the style of Silver / Bronze Age Marvels as these iconic characters battle and argue in the streets of NYC. While I may have a few minor gripes ( Hawkeye's character is seriously under-used, there's too much exposition onboard the SHIELD Helicarrier, the 3D is mostly pointless ) they are just that - minor. As an agonising aggregation of Assemblers and antagonists, Avengers Assemble is A-1! 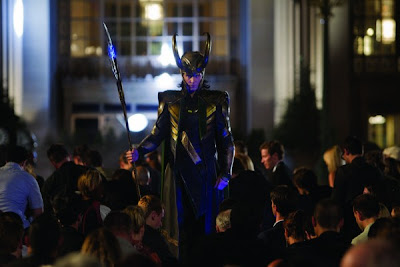 The plot is fairly straightforward: that fiendish God Of Mischief, Loki, has allied himself with a warlike alien race ( Spoilers! It's the Chitauri, not the Skrulls ) and has returned to Earth to even his score with the human race and big brother Thor. He plans to steal the Tesseract ( aka the Cosmic Cube ) from SHIELD and use the power of that Asgardian McGuffin to open a portal to Chaitauri-space and let his new-found friends in to wreak havoc on Earth, or New York at least. And if he averts Nick Fury's creation of a team of super human do-gooders in the process, all the better. 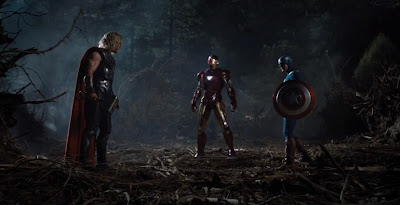 In the grand old Marvel tradition these mismatched heroes spend some time bitching and fighting amongst themselves before putting aside their differences to tackle their common foes. All these verbal and physical smack-downs are great fun and cinematic catnip for super hero fans. The three-way scrap between Thor, Cap and Iron Man is like a 1970's issue of Marvel Team-Up blown up for the silver screen: repulsor rays versus shield versus hammer. When the action hits the streets of New York the Avengers are forced to become a team and it's a delight to see the characters slotting into their familiar roles... and kickin' arse. I've only been waiting 40 years for this :-)

Whedon does a great job of tackling the large cast and giving them all ( with the possible exception of Hawkeye ) their chance to shine. As always, Robert Downey Jr gets all the best snarky lines as Tony Stark ( Tony Snark? ); Chris Evans is touching as the man out of time, struggling to understand the 21st century; Scarlet Johannson is given some suitably Whedon-esque issues to deal with; and Mark Ruffalo is subtle and witty as probably the best screen Bruce Banner yet.

Some favourite moments ( may contain spoilers ) :
The Helicarrier rising out of the sea
The first, ripped-shirt sighting of the Hulk
Lovely cameos by Harry Dean Stanton, Jenny Agutter and Stan The Man
The Black Widow / Loki confrontation
"Hulk... smash!"
Thor bringing the lightning
Cap showing the NYPD how to tackle alien invaders
Agent Coulson's moment of glory
That teaser at the end! Please don't walk out before the credits are over... 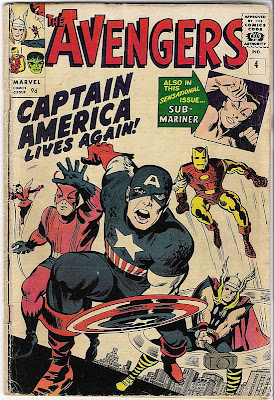 It was a total stoater, as we say in Scotland. That scene with the Hulk and Loki (yeah, that one) is worth the price of the ticket alone.

"Puny god!"
Yeah, the Hulk has some great comedy moments and is also impressive in the action scenes, too. Maybe a Hulk 3 would be worth a look - apparently, Mark Ruffalo's signed up for 6 movies.

I need to see this film. But the cinema is soooo expensive nowadays.

Steve, you do indeed need to see this film. The cinema is dear alright but it needs to be seen on a big screen. But don't bother with the 3D version: it really is a waste of money - I'm hoping to go again and see it in good ol' 2D...

It was a great film. I like how nobody got more to do than they could handle. Who would ever think that I would come out of a film with something good to say about Scarlet Johanson's performance?

I'm usually less interested in Scarlet's acting ability than in her other (ahem!) attributes, but she does a fine job in this movie, especially in the scene where she turns the tables on Tom Hiddleston's Loki.

BTW have you seen Lost In Translation, Cal? Scarlet is actually pretty wonderful in that...