Doctor Who: The Doctor, The Widow And The Wardrobe ( review with spoilers ) 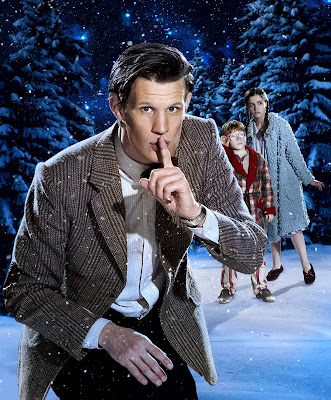 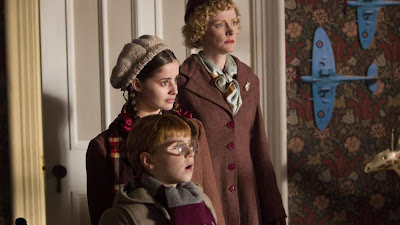 This year's Doctor Who Christmas Special is the now traditional brandy-soaked, mince pie-stuffed collision of sentimentality, good ideas, not-so-good ideas, Christmas iconography and budget-busting effects. With holly on top. And, old seasonal softy that I am, I loved it. ( Sorry, but if you're looking for a harsh, nit-picking fanboy's deconstruction of Steven Moffatt's failings, then, please... look away. )
The story starts with a bravura special effects setpiece, as the Doctor literally becomes The Man Who Fell To Earth, plummeting to pre-war England in a stolen "impact-suit" from an exploding spaceship ( a very impressive CGI wonder, equal parts Star Wars and Hitch Hiker's... ). The Doctor's helped on his way by quintessential, take-charge war-time Mum, Madge Arwell ( Claire Skinner ) and promises to come to her aid if she ever needs him. When her pilot husband, Reg ( Alexander Armstrong ) is lost over the Channel ( doing his best David Niven impression ) it looks like she'll need the aid of her Fallen Angel... The story cuts to three years later when Madge and her two children, Lily and Cyril, are evacuated during the Blitz and end up in an empty country manor house with an unusual caretaker...
Of course, it's the Doctor, who's doing his best to make Christmas special for the family but ends up, inevitably, placing them in danger. Young Cyril is tempted to open his Christmas present early ( see? that always spells trouble... ) and finds himself drawn into a frozen Narnia-esque forest. But he's not there on his own... 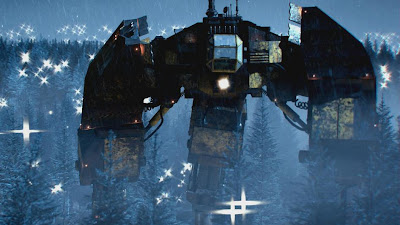 Cyril follows an unseen figure deeper into the forest, while the Doctor and Lily chase after him until they find a lighthouse containing wooden statues of a queen and a king and discover the secret of the forest. Madge, meanwhile, encounters some heavily-armed forest rangers who inform her that the whole, planet-spanning forest is about to be destroyed by acid rain. And so will her family if they stay there... 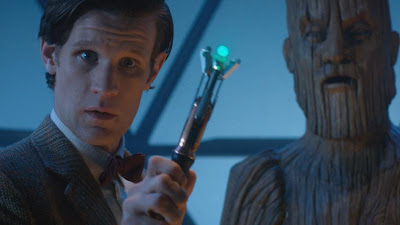 This story is visually stunning with its locations ranging from the warm visuals of the war-time family home to the frosty forest of "naturally occurring Christmas trees". There's an authentically folkloric feel to the images of the lonely lighthouse, the creaking wooden figures, the life-force "stars" rising up from the trees. That Alexander Armstrong's lost pilot / father will be returned to his family by the end is not exactly a surprise, but it still comes as a suitably heart-warming conclusion to the tale, and the Lancaster's flight through the Time Vortex is typical of the juxtapositions of the realistic and the fantastic that Doctor Who does so well.
The performances of the main cast are fine, Matt Smith again showing his ( and the Doctor's ) natural empathy with children, Claire Skinner and Alexander Armstrong doing sterling work with their admittedly limited roles. Not so good, and my main gripe with the episode, are the characters of the Space Marine-styled forest rangers. Bill Bailey, Arabella Weir and, er, the other one are wasted as some Douglas Adams-inspired characters who are there only for exposition and comic relief, but are a serious misjudgement.
All in all, an enjoyable and visually lovely story which, as ever, probably works best at Christmas when you're quite content to overlook minor niggles ( the way the Doctor is accepted as "caretaker", the lack of a focused threat beyond the impending ecological disaster ) in a haze of post-Christmas dinner good vibes. In that ( Christmas ) spirit I'll give the episode:
4 out of 5 Bow Ties ( or mince pies )
Posted by cerebus660 at 00:22

Email ThisBlogThis!Share to TwitterShare to FacebookShare to Pinterest
Labels: Christmas, Doctor Who, TV

I love Dr. Who! I wish I could've watched the Christmas special, but I missed it!

That's a shame! It wasn't a classic by any means, but it was beautifully made, undemanding seasonal fun.

The Doctor was an irritating, babbling idiot, and - nice Christmassy imagery aside - I found the whole thing totally uninvolving. Moffat seems to have demoted the programme from a 'must see' experience to a 'see if you like, but don't expect too much' non-event.

Even though they might have gone slightly overboard with the Doc's childlike ways recently, I do like the fact that it harks back to the days of Pat Troughton. All the angst of Doctors 9 and 10 did get a bit much at times...

I want to see a Doctor in the mould of a younger version of William Hartnell's initial portrayal. Now that would be something.

Maybe in the next regeneration... or the next...