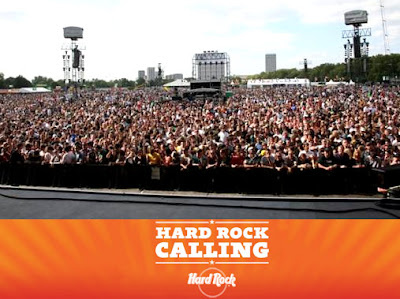 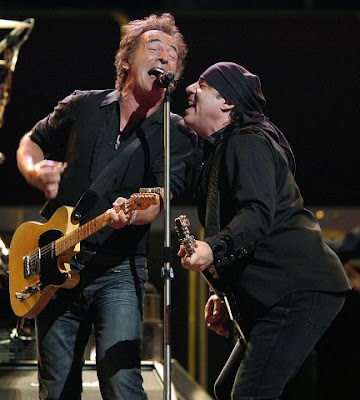 Last night Bruce Springsteen and The E-Street Band rocked London's Hyde Park at Hard Rock Calling 2009. They opened with London Calling ( what else? ), Bruce's tribute to the late Joe Strummer and The Clash. What a way to start a gig! From then on it was a great mixture of classics, recent songs and the now-familiar "sign collection" where Bruce picks out homemade signs from the audience, requesting songs. ( Unfortunately he decided against playing Incident On 57th Street, one of my faves I've never seen performed live. Can't win 'em all. ) The band were on fine form, playing up a storm, especially Roy Bittan and Nils Lofgren. Bruce was clearly there to party, obviously buoyed-up by the brilliant Glastonbury show the night before. He clowned around with Stevie, handed the mic to a young kid in the crowd to sing a chorus of Waitin' On A Sunny Day, and generally ran up and down the stage like a man half his age. At one point, after jogging along the camera-pit, he fell up the steps back to the stage and joked "I need a frikkin' elevator! I'm pushin' 60!"
The highlights: an epic Outlaw Pete ( works really well live ), a spine-tingling Racing In The Street, the Gaslight Anthem's Brian Fallon duetting on No Surrender; Rosalita and Jungleland show-stoppers as ever. The reaction from the crowd was at sonic-boom level, singing, cheering, clapping, chanting "Broooooce!!!" at the top of their lungs. I did hear some people near me complaining that Bruce didn't perform The River or Thunder Road and I admit I was surprised the latter didn't appear in the set. But with The Promised Land, Badlands, Glory Days and Dancing In The Dark all present and correct we had enough classics to keep us happy.
So, a great, baking hot day in the idyllic setting of Hyde Park, only slightly marred for me by our capital city's wonderful road system with its refusal to display any useful roadsigns. Welcome to London: you'll never leave!Honourable mentions to The Gaslight Anthem and The Boy Who Trapped The Sun for standing out among the other bands, and a big thumbs-down to The Dave Matthews Band who were unbelievably tedious.
As the title above suggests I hope to blog some more about the man they call The Boss throughout the week, inbetween the usual nonsense...
Soundtrack: Working On A Dream by Bruce somebody.
Hey, post number 100!! Shouldn't I get a telegram from the Queen, or is it all emails nowadays?
Posted by cerebus660 at 22:17