Overdue gig reviews: The Orb and Everything Everything 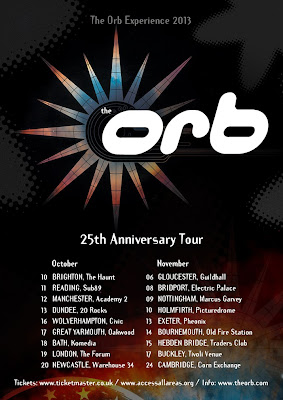 OK, time to catch up with some ridiculously late reviews, starting with a couple of gigs, one recent, one not so much...

The Orb, those legendary ambient dance / dub scientists, landed in Gloucester as part of their 25th anniversary tour. As they were playing my favourite venue, the Guildhall Arts Centre, it would have been rude not to go along. I took James with me  -  his first "proper" gig. He's been to a handful of outdoor events where bands happen to be playing but this was his first time in an actual gig / venue situation. He loves his dance music and likes what he's heard of The Orb so he was keen to see them play live. 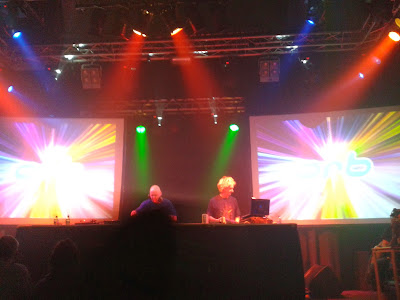 After a fine set of old skool dance classics from a local DJ whose name escapes me ( but was something like Brian Chaos... ) The Orb casually wandered on to the stage and started to play with no fanfare or fuss, not even a "hello" to the crowd. Although they're the most anonymous group imaginable the music more than makes up for it. From a relatively quiet, ambient House beginning, The Orb branched out into some heavy, heavy dub with detours into psychedelic noise, before slowing the pace once again for a crowd singalong to samples from Minnie Ripperton's Lovin' You... 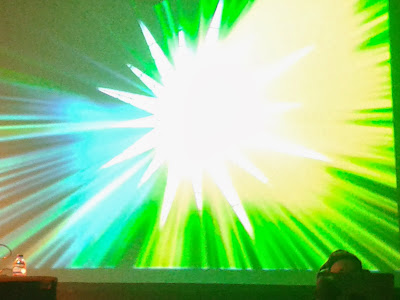 Although it took a while for the crowd to warm up, the band eventually got everyone dancing ( or just nodding their heads to the beat in some cases ) to classics like Towers Of Dub and Little Fluffy Clouds ( of course ). It made a refreshing change from the usual guitar-based bands I tend to watch, immersing myself in the hypnotic beats, feeling the floor vibrate and the bass punching me in the chest like an extra heartbeat. James had a great time too, lost in music, and, like me, was also impressed by the band's choice of strange videos projected on the screens behind them  -  including classic clips from Ray Harryhausen movies. Talos the Bronze Giant! Yay!
They were, indeed, Orb-some :-) 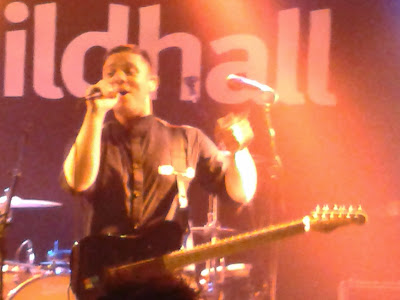 What did I just say about guitar bands? Going waaaay back to the end of June I was in the Guildhall yet again for one of the freshest, most innovative guitar bands of the moment, Everything Everything. My good friend Tom ( of The Sensitive Bore fame ) had won a couple of tickets to this gig and kindly invited me along. EE ( as no-one calls them ) were not a group I was all that familiar with but they turned out to be a fantastic live act and went down a storm with the predominantly young audience.
Everything Everything are dauntingly proficient musicians, every song containing surprising twists, turns and time-changes, but still welded to massive tunes and staying just the right side of pretentious. Cough Cough and Kemosabe are huge, singalong indie crowd-pleasers, Duet is the kind of anthemic ballad that Coldplay only think they are producing, while Don't Try is a typically idiosyncratic take on Neptunes-style R 'n' B. I missed all but one song by support band Thumpers
( terrible name! ) but Tom assured me they were very good and later coined the term "bliss pop" to describe them  -  a phrase that could easily be applied to the headliners too. 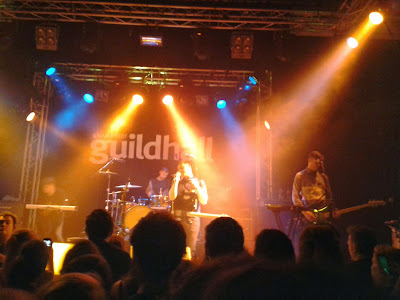 As I said, the band went down a storm... especially with the absolutely hammered male students in the audience. This prompted a new phenomenon, the "posh mosh", in which a bunch of obviously well-heeled kids slammed into each other ( and anyone nearby ) throughout the whole night as if they were at some hardcore Punk gig, seemingly completely ignoring the band, thinking their antics to be the centre of attention. It all got very boring very quickly. Even the band noticed: introducing last song, the spine-tingling, atmospheric The Peaks, singer Jonathan Higgs said "you won't be able to mosh to this one..." But they did :-)
Anyway it was an awesome gig! I got myself down to HMV the next day and bought the band's latest album, Arc, which has been a permanent fixture on my CD player ever since and may well be my album of the year in what has been, let's face it, a bloody good year for new music. More to follow on this subject...
And thanks to Tom for getting me the ticket!