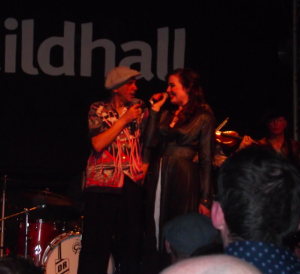 A few weeks back I finally saw one of my favourite bands of all time play live at my favourite venue  -  the mighty Kevin Rowland and his revitalised Dexy's ( minus the "Midnight Runners" ) at Gloucester's Guildhall Arts Centre. This was the first gig I'd been to after finishing my radiotherapy and, even though I was still feeling under the weather, I was determined to go. I'd already missed a couple of gigs I had booked tickets for  -  local boys Chinese Burn and Noise Agents supporting Stiff Little Fingers at the Guildhall, and The Gaslight Anthem at the Bristol O2 Academy  -  which was annoying, but couldn't be helped. Dexy's, however, were a special case. Their music had meant so much to me over the last 30 years and I'd never had the chance to see them until now. 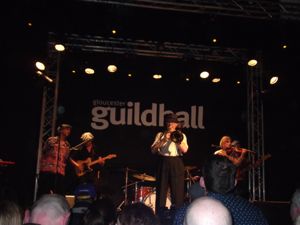 All things considered, I did pretty well. I dragged Sarah and my mate Kev along as well for moral support. Kev isn't a great live music fan but had a good time and I'm certainly glad he came along.
Dexy's were amazing! A highly theatrical performance of recent album One Day I'm Going To Soar, packed with the patented Dexy's brand of emotionally-charged Soul and Folk music. Main man Kevin Rowland ( it was all about the Kevins! ) was wonderful  -  still a totally unique, passionate frontman with his fantastic voice as powerful and moving as ever. After playing the album in its entirety Dexy's came back for an oldies set which, I have to admit, left me a bit emotional. I never thought I'd see Dexy's play live and to hear such awesome songs as Until I Believe In My Soul and This Is What She's Like played so beautifully... well, I was overwhelmed. 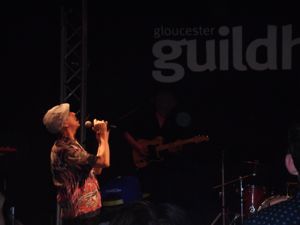 Apart from our seemingly never-ending PC problems ( I'm typing this on Sophie's Netbook ) the main reason this review's taken so long to appear is that I was waiting for my full report on the gig to be published on the Louder Than War website. They've been having their own technical difficulties but things seem to be sorted now. I also have two other gig reviews in the pipeline for the site which I will post here when they're running at LTW.
My full Dexy's review can be read ( should you want to, of course... ) here:
http://louderthanwar.com/dexys-at-gloucester-guildhall-arts-centre-130413/

Cerebus, jump over and have a look at the Batman post - I've added pics from #210.

Thanks for that, Kid! That's definitely the issue I remember. I'll have to track both of those mags down :-)