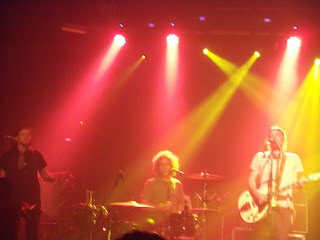 ( Continuing your humble narrator's adventures in that there London Town with Chinese Burn superstar, Glenn L )

A second visit to London in one year from Portland, Oregon's premier psych-rock / dream pop outfit is a rare treat, so a packed-out Heaven is buzzing with anticipation. First up are The Blue Angel Lounge, frighteningly young and intense indie gloom-rockers from Germany. They wear their influences on their sleeves  -  most notably The Horrors' crashing waves of sound  -  with hints of The Velvet Underground, The Cure, Killing Joke and even early Pink Floyd breaking through the clouds of dry ice and reverb. An initially wary crowd is converted by the end of their impressive set, In Distance's refrain of "I dream about you all the time..." echoing in our heads. 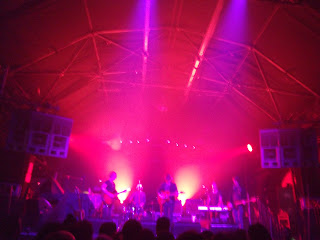 Appropriately enough for the Biblically-named venue, The Dandy Warhols kick off their crowd-pleasing set with the familiar washes of synth and George Harrison-esque chords of Godless. And from those first few notes the audience are entranced. The Dandys are notorious for embarking on extended, self-indulgent jams when playing live ( although the days of them sitting on the stage and spliffing-up are long gone ) but tonight they mostly give us the more tuneful, singalong side of their repertoire  -  and we couldn't be happier. Turning Heaven into one bouncing, bellowing mass The Dandys drop classic pop song after classic pop song  -  Bohemian Like You, Boys Better, Not If You Were The Last Junkie On Earth, Get Off  -  before getting heavier with an insane version of Horse Pills. Songs from the frankly disappointing new album, This Machine, don't fare so well, but at least keyboard player Zia gets a chance to strap on a bass and rock out to recent single Sad Vacation. Other highlights include Courtney Taylor-Taylor's one-man-and-a-guitar take on Every Day Should Be A Holiday, an audience member getting on stage to propose to his girlfriend ( she said yes, luckily ) and ex-members of The Specials and Adam & The Ants bringing extra dimensions to The Dandys' sound with trumpet and flute respectively. 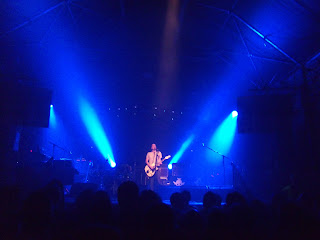 .
For all their cooler-than-thou, hipster attitude, when on form The Dandy Warhols are one of the best live bands around and tonight they proved it, sending the Heaven audience out into the rainy London streets with a collective smile on its face. And, in fact, of the four times I've seen the Dandys this was easily their best performance. A great night in a cool venue. 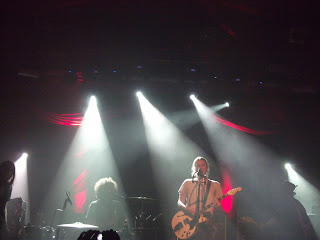 Glenn and I went for a few beers in a pub with a leaky roof (!) and tried unsuccessfully to dodge the rain around Leicester Square. There was no after-show DJ set from the delightful Zia this time, unfortunately... but we still had a good laugh. A couple of touts tried to entice us into strip clubs with the promise of free drinks and "pink pussy" but we just moved on. Maybe next time...

Cracking review, Simon! Apart from the massive hit that was Bohemian Like You, The Dandy Warhols slipped under my radar. I'm vaguely aware of Dig! (http://www.imdb.com/title/tt0388888/), a documentary about their rivalry with The Brian Jonestown Massacre. Perhaps I should add it to the Christmas list.

Thanks Tom! The Dandys are one of those bands who can be brilliant one minute but terrible the next. Sometimes on the same record. Sometimes in the same song. But they are definitely a fantastic live band and this recent gig was the best I've seen them. I've borrowed that Dig DVD from my mate and no. 1 Dandys fan, Glenn, but haven't got round to watching it :-(

Hope you enjoyed the Focus Group Xmas bash. Sorry I couldn't make it. I am almost back to fighting strength and will soon be released back into the wild...