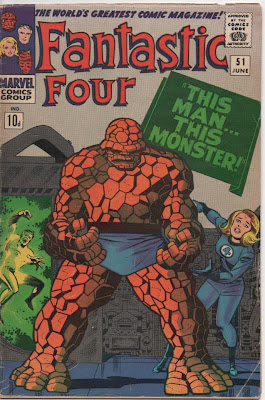 To atone for my shameful lack of blogging recently, I thought I'd start another semi-regular comics feature, as a replacement for the late, lamented Steranko Saturdays. I've made no secret of the fact that my all-time favourite comic book is the Stan Lee / Jack Kirby Fantastic Four. A quick glance at my header picture above
( by the great John Byrne ) only confirms my nostalgic and slightly sad attachment to all those weird and wacky Kirby Kharacters from the Silver Age of the House Of Ideas. And, of course, the fact that the FF is 50 (!) years old this year and eminently newsworthy ( due to the Death Of Johnny Storm "event" ) convinced me to go into a bit more depth about the fabulous foursome and their four-colour fables. ( Can't you tell I've been reading some of Stan's supremely sensational scripts? It's suddenly all alliteration and hyperbole around these parts... )

Above is a cover-scan of my copy of FF #51, probably the most talked-about single issue of the comic. Coming after the mind-blowing spectacle of the Galactus Trilogy, this is a smaller-scale character study which begins with Ben ( The Thing ) Grimm suffering one of his recurring bouts of melancholy.....

Ben's walking the streets of a rain-soaked Manhattan, thinking to himself: "I'll never be human again! I'll live... and die... just the way I am!"
Before long he's taken in by a kindly wood-cutter... sorry... a bald scientist who operates out of his front room due to lack of funds, recognition etc. He offers Ben company and coffee but, of course, turns out to be villainous. He drugs the unsuspecting Thing and, using his handy "duplication apparatus", swaps places with Ben with the intention of destroying the Fantastic Four. He talks at first about his bitter years of being mocked for his theories and how he wants to prove he's the "mental superior of Reed Richards." However, as soon as he turns into a walking pile of orange rocks, he sounds more like an X-Factor candidate: "Now, all his fame... and his power... are mine!"

The fake Thing takes his place in the unsuspecting FF, with even an appearance by an irate, human Ben Grimm failing to uncover his deception. Reed, worried about aliens attacking the Earth
( and, to be fair, that had happened quite a few times over the last 51 issues ) is tinkering with his latest invention, a gateway into sub-space, or the Negative Zone as it is more often known. He plans to dive into this strange, new universe and explore it for the good of mankind. At this point, our ersatz Thing starts to realise that Reed isn't just a glory hound:
"He's tacklin' a job that won't net him a plugged nickel... and he's doing it without any fanfare... or any publicity!"
The "radical cube" is one of Kirby's most memorable machines, a gleaming metal monstrosity which sends Reed on his cosmic trip, prefiguring Clarke / Kubrick's 2001: A Space Odyssey by 3 years:

"Everything is moving faster now! The universe has become a vast kaleidoscope of light and sound!! There's only one explanation... I'm finally approaching my goal! I'm at the very edge of sub-space!" 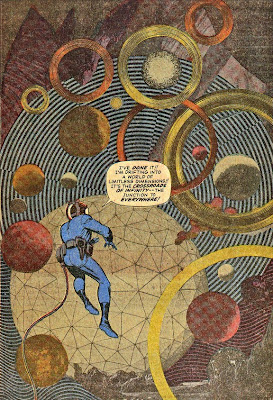 But, once past the "crossroads of infinity", Reed finds himself being drawn inexorably towards the Earth, where the negative elements of sub-space are destroyed in the positive-universe atmosphere.
( I've never quite figured that idea out. Has nobody on Marvel-Earth ever noticed huge chunks of anti-matter rocks exploding in the upper atmosphere? Or is it invisible to our world, coming from "a four dimensional universe"? More likely it's just a case of Stan Lee trying to make sense of Kirby's outlandish concepts, which often looked amazing but didn't bear much scrutiny. )

Our villain in Thing-form has been charged with reeling Reed back in on a cable ( high tech! ) and knows that this is his chance to leave him to die... but he can't do it. He struggles with his conscience and comes to this conclusion:
"I never did a worthwhile thing in my life!! But now... I've finally got the chance! I can really be Ben Grimm! I've gotta do it! I'll save Richards!"
( Interestingly, the formerly loquacious scientist is starting to talk and think more like Ben Grimm than himself. )

While the fake Thing dithers, the cable snaps, but he grabs the line and is pulled into sub-space. Standing on a piece of asteroid, hurtling to destruction, the un-named scientist realises that his years of envy were wasted on a man who was a far better human being than he could ever have been. Using the Thing's awesome strength he hurls Reed back through the portal to our universe and then sits down on his rock to contemplate his fate. As the real Ben Grimm changes back to his familiar, rocky form and the FF are reunited, Reed sums up this morality tale when he says that the anonymous "villain" may have done and planned monstrous things, but "he paid the full price... and he paid it like a man!"

This may all sound corny and preachy in this cynical age ( and it probably did back in 1966! ) but Stan's philosophy is heartfelt and warm and the story-telling of the Jack Kirby / Joe Sinnott art team is faultless. And I love that cover! With no dialogue or captions beyond the story's title, Kirby effortlessly sets out the drama: Reed trapped and desperate, surrounded by Kirby Krackle, Sue wordlessly pleading, the fake Thing standing immobile, looking lost, drawing the reader in - why is the "hero" doing nothing? It's an object lesson in selling a story with simple but powerful images. Something which, back in the Silver Age, was one of the consistently wonderful features of... The World's Greatest Comic Magazine!
Posted by cerebus660 at 20:26