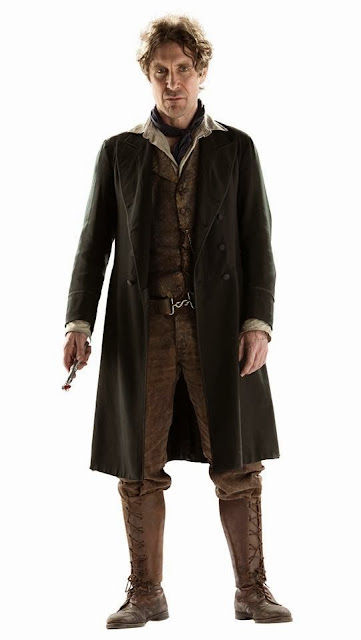 The BBC have released an online prequel to next week's Doctor Who 50th Anniversary special, starring the ever-wonderful Paul McGann as the 8th Doctor. This "minisode", The Night Of The Doctor, is the first ( non-audio ) appearance by McGann's Time Lord since his one-night-only turn in the 1996 TV movie. In this short episode we finally get to see the 8th Doctor's regeneration... but not into Christopher Eccleston...

It was a genuine surprise and pleasure to see McGann reprise his role of the Byronic, heart-on-sleeve 8th Doctor, albeit one clearly older and damaged by the Time War. Back in 1996 his interpretation of the character was definitely the best thing about the Anglo/American compromise that was the TV Movie. Sarah and I were instantly captivated by McGann's fresh take on the Doctor and were, along with many others, absolutely gutted that the episode turned out to be a false dawn for Doctor Who. The 8th Doctor's story continued in original books and audio plays, but not in the hoped-for TV series.
We would have to wait another nine years for new Who on TV but, of course, the Doctor was recast and the show moved on, with only the occasional, brief flashback to the previous incarnation. So, it was really lovely to see this fleeting return of an old friend in such an important year for the show. And, obviously, somewhere out there in time and space the 8th Doctor is still having adventures. Maybe he could drop in on us again sometime? How about it, BBC...?

He wasn't wearing the wig, but his more sombre performance made you realise what a mistake the BBC made in not getting him involved when the series was revived.

Yeah, this was the stuff.

I just rewatched the TV Movie a couple of weeks ago for the first time since it originally aired in the U.S., and it was pretty rough to get through a second time. You might be underrating Eric Roberts as the Master; for me he was the highlight of the proceedings. Roberts conveyed the impression of being so intelligent that he’s always bored by and contemptuous of everyone else, while only the challenge posed by the Doctor gives him a reason to strive. He just felt like the real Master. I can’t in good conscience recommend sitting through the entire thing again just to see his part, however.

McGann was a revelation in this minisode. In the TV Movie he hadn’t really found his Doctor, and the script gave him nothing to work with. (I really really didn’t like it, in case that wasn’t clear.) But here, as soon as he shows up, it’s all there. The script doesn’t need to give him any quirks or catchphrases; he immediately feels like the Doctor and a clear sense of this regeneration’s distinctive traits comes through. All those years playing him in audio releases and his sheer skill as an actor pay off.

And all credit to Moffat for getting so much right. My favorite bit, oddly enough, was the Doctor not leaving the doomed ship, hoping until the very end he could save one more life.

@Kid
Although I would have loved to see more of McGann's Doctor back in the day, I can totally understand RTD's decision to recast the part in 2005. He wanted to attract a new, mainstream audience and not just pander to the fan element... which was a failing of the 1996 TV movie, TBH.

@Richard
I remember being swept up by the excitement of seeing new Who in 1996... and managing to ignore the more questionable elements of the movie. I have to disagree about Paul McGann "finding" his Doctor: I thought his performance was amazingly confident and, by the end of the movie, he WAS the Doctor for me. It's just a shame we've had to wait soooo long to see him again...