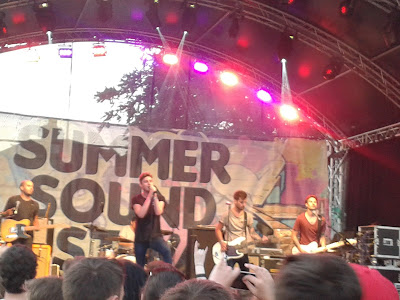 After seeing the massive Springsteen concert at Coventry's Ricoh Arena, it's been good to go to a couple of smaller, more intimate gigs recently. Back on the 20th of July Sarah, James and I went to Summer Sound Festival, the second year of this annual free gig in Gloucester Park. There had been bands playing all afternoon but we didn't get there until the evening and only managed to see headliners Kids In Glass Houses and support Chloe Howl. 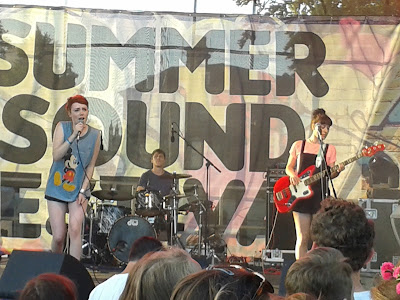 Chloe Howl is the latest contender for the Lily Allen / Kate Nash / stroppy Londoner crown, although better than that sounds. She's a bouncing, pint-sized, flame-haired vixen on stage with a sly glint in her eye and a nice line in acerbic lyrics. Her band punched out some cool '80s-influenced pop, inviting comparisons to a less retro La Roux, with even a cheeky nod to New Order on breakthrough single No Strings. She's definitely someone to watch out for and her recent Radio One airplay should do her some good. And, as James said to me, "she's cute, so that helps..." 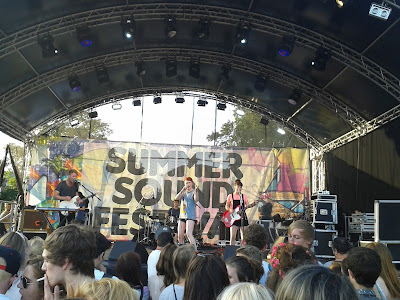 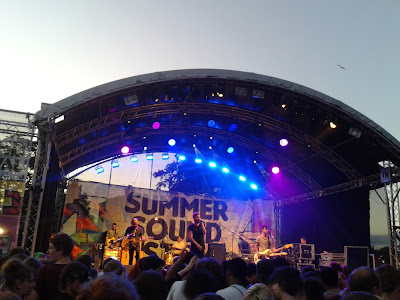 I was vaguely aware of headliners Kids In Glass Houses from seeing a couple of their videos on Kerrang TV but didn't know quite what to expect. They turned out to be a great live band  -  very enthusiastic and energetic, with some fine, upbeat, melodic rock songs. They had the whole crowd
( including us! ) bouncing up and down to anthems like Give Me What I Want and Matters At All, while singer Aled dived into the crowd at one point but managed to keep singing as he was buffeted around and eventually manhandled back onto the stage. I'll definitely have to see this band again  -  great fun. For an outdoor gig the sound was very crisp and clear, the lovely Summery weather ensuring the music wasn't blown away by any meteorological interference. 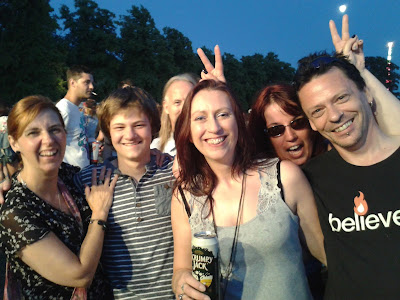 And here are Sarah and James with Sam, Jacqui and Glenn  -  just after the gig, and just before heading to the fair to get a burger :-)
Next gig review: Everything Everything at Gloucester Guildhall

Soundtrack: No Strings / Rumour / I Wish I Could Tell You by Chloe Howl
Posted by cerebus660 at 01:11