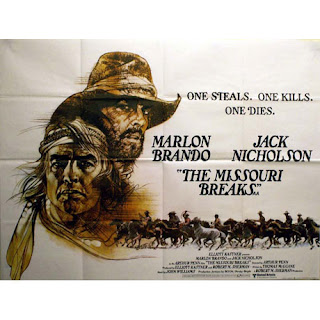 Since I've got a lot of time on my hands while I'm still recovering from my radiotherapy, I've been watching quite a lot of TV ( probably too much! ) and I thought it would be cool to start another semi-regular feature here at TGWS... this time on all the old movies I'm watching. Starting with Arthur Penn's 1976 revisionist Western The Missouri Breaks... 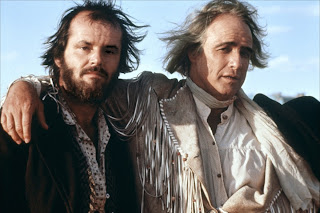 Otherwise known as The Jack & Marlon Show. As the poster tagline says above: "One steals. One kills. One dies."
Jack Nicholson stars as Tom Logan, leader of a group of inept rustlers in late 19th century Montana. More proficient at boozing and whoring than rustling, Logan's gang plan to steal horses from across the Canadian border and sneak them back into the US across the Missouri Breaks. Local landowner David Braxton ( John McLiam ) has other ideas and hires a "Regulator" to hunt them down... in the form of eccentric ( ie bat-shit crazy ) gunman Lee Clayton ( Brando ).

Although a failure at the box office on release this film has gained a solid reputation over the years and I'm glad I've finally got round to watching it. There is some beautiful location filming ( only to be expected from Arthur Penn ), loads of salty, earthy dialogue and a great cast of character actors, led by the ever-dependable Harry Dean Stanton, backing up the stars.

Nicholson plays Tom Logan as a laconic, contained character, knowing his life is going nowhere, who tries for one ( doomed ) stab at happiness when he romances Braxton's daughter, Jane, sparkily played by Kathleen Lloyd. Brando, in contrast, is a delight as a vegetable-munching, dress-wearing, cold-eyed killer... seemingly channelling Richard Harris' accent and his very own eccentricities. The two only share about three scenes but when they do the star power fairly fizzes from the screen. Not a classic film by any means, but definitely a quirky, unusual treat for those ( like me ) who aren't usually Western fans.

Very quirky... I remember thinking after I'd watched it years ago: "Well, that was weird..."

"OLD" movieof the week? So sad. I remember when this one was brand new.Nobody seemed to know what to make of it as I recall.

@ Mike
You should definitely see it again. Quirky indeed in terms of performances, but the cinematography and atmosphere often head in a darker direction, too. As I said, I'm not big on Westerns, so these little touches make it interesting from my own perspective.

@ Steve
It's a good job I didn't call it "Prehistoric Movie Of The Week" :-)
I was only 9 when this film came out so it's old for me... but I appreciate it's not that old in the history of movies. I've got some more vintage movies to watch yet, including a DVD of Citizen Kane - a film I haven't watched in 20 years or so which definitely needs revisiting. My kids think anything made in the '90s is ancient ;-)