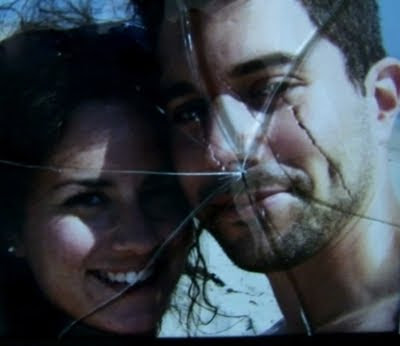 It was my birthday yesterday ( yeah I had a good day, thanks for asking ) and what better birthday treat could I have than to see a scary movie? Sarah and I went along to our local purveyor of blockbusters and over-priced popcorn to see "found-footage" fright-fest Paranormal Activity.
I took Sophie to see this a couple of weeks ago with a bunch of her school friends. It seriously freaked her out - no more scary movies for you, young lady! So, obviously, what scares a 14-year old will seem pretty tame to a cynical old veteran of horror movies such as myself, right? Well.....
As everybody knows by now, the set-up of the movie is very simple: a 20-something couple move into a new house, experience a few odd goings-on, start documenting the events on a digital movie camera, things escalate, terror follows. The build-up is slow as we see Katie and Micah try to figure out what's going on, set up a camera in their bedroom to record anything unusual, bicker and fight, reach out for help from a psychic, deal with poltergeist-like activity, and finally confront the horror head-on. The Blair Witch-style format works well here: the couple are convincing as ordinary people at their wits' end, not just Hollywood teen cyphers. Very little is seen or understood of the apparition tormenting them - it has been following Katie since she was a young girl, they identify it as a "demon", and that's about it. The genius move the director makes is to lock off the camera in their bedroom each night in one static position. The audience finds itself studying every corner of that room as the couple sleep and the slightest movement of a shadow across a door heralds another attack. It reminded me of the scenes in The Exorcist when the characters would run upstairs to Reagan's bedroom as the demon kicked off again, and the audience would brace themselves for what would be found on the other side of the door.
The gradual escalation of the story pays off at the end with some genuinely creepy final scenes as the demon finally takes control of the situation and things don't end well for Katie and Micah. Sarah and I were both gripped by this payoff but it was slightly spoiled by a group of teenagers who seemed to find it hilarious and laughed uproariously, probably in an effort to cover up the fact that they were scared. Stick with Scary Movie, kids!
Soundtrack: The '59 Sound album by The Gaslight Anthem
Posted by cerebus660 at 23:48

I like the new header picture. It reminds me of a book on my bookcase that I would love to recommend to you, I think you'd find it fascination (if you haven't read it already - and even then...)

The tao of Pooh by Benjamin Hoff.
http://en.wikipedia.org/wiki/The_Tao_of_Pooh

Perhaps a birthday gift to yourself?

Again, Happy birthday. Glad to see you on my page often - Thanks.

Thanks for the birthday wishes -
and the book recommendation!

The header picture ( from Calvin & Hobbes ) is appropriate as we're today seeing the first snow of the winter here in the UK.

HI hope no baked potato heads made an appearance, though if a tall, grey-haired man and his young assistant showed up, I'd be more than jealous as hell. =) Happy birthday and many more!