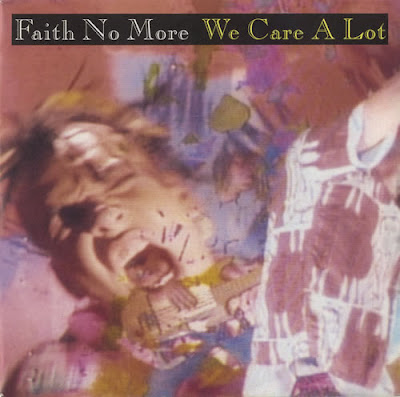 This is the start of what I hope to be a regular series of posts about some of the best gigs I've been to and the bands who've destroyed my eardrums and kicked my ass.

To start with we're going back to June 1988, the Bristol Bierkeller, and the mighty Faith No More. Not the stadium-bothering megastars fronted by Mike Patton, but the earlier incarnation with eccentric ( ie a bit of a dick ) Chuck Mosely on vocals. They had recently had their first UK hit single with We Care A Lot and were at the stage where they were packing out smaller venues on their way to the big leagues.
They came on stage with Mosely wearing a safari suit (!), shades and a cravat, which he discarded throughout the set as it got hotter and hotter, until he was just down to his boxers. Thankfully he didn't go any further. Behind Mosely's crazed stage persona the band were a powerhouse, insanely heavy and intense: from the crushing tribal drumbeat of Chinese Arithmetic to the final very-metal freak-out of Sabbath's War Pigs, it was non-stop raw power.
A serious amount of moshing and stage-diving fun was had by all. One lad next to me in the crowd obviously wanted to stage-dive but couldn't work up the courage. When it came to the encore he knew it was now or never, I pushed him up onto the stage ( no stupid crowd-barriers in those days ), he launched himself into the air, the audience parted, and splat! he hit the deck, face down. Oops!
So, definitely one of the best gigs I've ever been to. FNM booted Mosely out soon after, released The Real Thing album with Mike Patton and went on to bigger things. But, in the age-old tradition of nerdy music-snobs, I think they were a better band back then, when they had it all to prove. And I was there, you hear me, I was there! ( OK, grandad, calm down, it's medication time...)

Soundtrack: Introduce Yourself by FNM.
Posted by cerebus660 at 22:56

Thanks, Saranga. I've got loads of bands I want to write about, but hopefully I won't come over as too much of an old fart when I delve back into the past.When I were a lad, etc. etc.

i liked FNM with Patton as much as with Mosley i think. both were perfect fits with that band. The Worm Turns is probably one of my favorite songs by them but Angel Dust is such a great album. tough call.

i don't think you'll come across as an old fart. at the least, I think i've only listened to about 3 new bands in the last 10 years so possibly i'm not one to judge.